For this writing slam we used the word I suggested last week but did not use and promptly forgot about. We gave ourselves 10 minutes to write as much as we could about the word Silhouette. In reality we had 11 minutes, but don’t spread it around okay?

Why? That was the one question that private eye Harvey Bloomfield could not figure out. Sure, he was not having much luck with the other common questions, but that one was sticking out in his mind. Why?

When? That question wasn’t a problem, considering the complexity others. It was last night, one am.

Where? Another easy one. Outside O’Finningans, his long time favourite club.

Who? Well, that one was obvious. Her. The singer on the piano in the eveningwear with the gloves that almost went past her shoulders. The woman from last night that had started this whole debacle. The woman that in the end had evaporated in a flash of mist after the gunshots rang out.

What? Harvey wasn’t fully aware of what this answer had really meant, but he did know it, thanks to the hoodlums that had fired the Tommy-guns before she had vanished. She was Silhouette, that was either her name, or it was what she was, something dark and mysterious, but yet something that had needed him. Needed his help.

How? Harvey didn’t really know, but he had used his detective reasoning and had settled sometime ago on the only possible explanation. Witch’s magic. It is what made the most sense considering the events of last night.

Why? That was the question he could not figure out.

The microphone came down with a sickening thud. Already it had found purchase countless times within the now unidentifiable smudge that had been music producer Todd, but now it was just adding insult to horrible death. It was as if his death had become a game for these… things. These horrible things. Once the music lover had finally been beaten to a fine pulp with the aid of microphones, plastic white shoes, and overly large sunglasses, the beasts jumped in to drink up the valuable musician nectar.

Claymations they were once called, at least before they were possessed by the ghost of that cult of demon-worshiping Nazi-sympathizing, serial-killer, werewolf-transformed, zombie-vampire, monster-clones, but now they were alive. Alive, and with an unquenchable thirst for revenge. Lo, how it had been a mistake to fashion them to resemble the driest of fruit. For now they had a terrible need for the blood of musicians that could never be sated because of their dried out husks.

The latest writing slam. This week we gave ourselves about 20 minutes to write on our random topic, but for 10 of those minutes we actually were listening to the Frozen soundtrack, so I don’t know if they count towards the total or not.

Snap! Another plank shattered from the force of a single hammer hit. Shards gently floated away and bounced off walls, ceilings, and floors with soft squishy noises. They had been at this all day, and barely had even the starting of their bookcase finished.

“These genetically modified mega-mushrooms are awful,” Ja’handa scoffed as another mushroom plank split down the middle just from her picking it up. “I don’t know how we are supposed to build anything with them.”

“I know, but it is all we have. Metal is too expensive. I wish that they knew trees couldn’t grow in zero gravity before setting off into this space trip.” said Maharizard with great exposition in her voice.

Timber was a prime commodity on Space Station Chiron 7, and was completely out of the salary range of two space accountants. So they would be forced to use this dirt cheap, poor excuse for mushroom timber to make their bookshelf.

“Why are we even trying? The stupid thing is just going to shatter if we put a book on it!” sighed Ja’handa.

“Not if we coat it with earwig honey first!” Piped Maharizard, who always saw the space glass as half space full.

“Earwig honey?” Yelled Ja’hanada, “On our salaries? Let’s just go get some space martinis, kick off our space boots, and call it a Space night.”

I am taking a stab at my own cover design. The background  is basically finished, so I thought I would share my progress on here, because that is what a website is for.

I haven’t used Photoshop for artwork purposes (at least for my own artwork and not client artwork) since about 2002. It was fun to get back into it and learn so many new things. This background turned out very professional, which was my motivation to keep going!

Stay tuned, I am nearly finished the ‘Boss’ portion of this cover. His sporran is looking particularly rugged!

Breakers of the Code – Cover – Background

You can see the Entrance to the Lova Mines, the Tower of Mechanis, and the Castle in the Sky in the background. There is a bit of unfinished area in the middle mountains, but it is covered by ‘The Boss’.

Despite what you may have heard, Chad does not have plans of appearing on this cover. While he is well known for his appearance on the official game box for Annals of Gentalia, he could not make it to the photo shoot for the novel cover. When asked about this he stated how grateful he was to have all of his fans, and that he loves each and every one of mew.

The latest Writing Slam, With all correct apologies to the correct people. We had 8 minutes this time to write as much as we could on the random topic of Blankets.

Mary had always felt sorry for Blanket. What a horrible name that was, Blanket. Whoever named this kid had been a real, well as Mary’s mother put it, a real so-and-so. Sure, Mary had tried to talk to this boy when he first came to class, mysteriously appearing one day, his other siblings elsewhere in the school. As Mary’s mother said, just more victims of the welfare system. Adopted eventually after being rummaged from place to place, forgotten, and tattered.

Where did he come from originally? The adults seemed to know, but wouldn’t say. Mary’s mother certainly did know, but had never let it slip. This only hurt the boy’s chances further, strange and mysterious was a dangerous combination.

But still, Mary always thought of the poor boy, slightly younger than herself, as tattered. He always came off as distant, as if he was staring into space. Never really there, always alone. Just uncertain of who he was and where he came from, always just waiting to drift off again into his own personal Neverland. 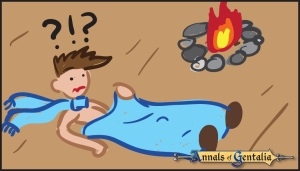